Mass during Covid times: ushers / seating / and masks; a frustration and a commendation!

Frustration: folks often insist in sitting in a particular seat, and ignore instructions of ushers.

Scenario: usher asks you to sit in a pew that is not your preferred pew, and you ‘politely decline.’ Or the usher seats you in one pew, and as soon as the usher goes back to the door you move to wherever you want. This has led to multiple instances of our being unable to seat larger families and they have to go to the PLC or watch the Mass on Facebook in their car.

I understand the desire to be seated in the same pew and the psychology of prayer, that routine helps. But this is not the time for that. I am not exaggerating to say that families have been unable to get into Mass and receive Holy Communion because people had to sit in a specific pew. It is an injustice and sin against charity to insist that ‘my preference for a particular seat is more important than another families’ ability to get into the church and participate more fully in the celebration of Mass.’ During Mass, from the priests chair, I have often seen families turned away at the door when there would be space if folks were more cooperative.

If you react to the manner in which the usher is asking, ok…. forgive other’s trespasses (the ‘rude’ tone) as yours (‘ignoring’ the ushers instructions) are forgiven. There are pews and single chairs spaced around the church so that we can get the maximum number of families and people into the church. It is not a perfect system, and ushers are doing their best. When a single person or couple sit in a ‘less desirable’ spot, they are likely allowing more people to come to Mass and receive Holy Communion.

And yes, families, could you come to Mass together as much as possible? I have seen members of a single family coming to three or more separate Masses. What would have taken up one end of a pew at a single Mass is now taking up the same at three Masses. I understand that it is not always possible, but we can help to enable more folks to receive Holy Communion.

Commendation: just today, I had a conversation with an elderly parishioner who is still afraid to come back to Mass but is starving for Holy Communion. Because of your cooperation in wearing masks, I was able to tell her that she will be able to have a seat and folks around her will have masks on. She was visibly moved and so excited at the prospect of coming back to receive Holy Communion!

And yes, that conversation has been happening frequently recently!

Have a blessed day!

Do you have a favorite month?  I love October.

Why? You probably guessed because of Halloween and the world wears orange. Sorry to disappoint, but that’s not why.

Because October is a series of feast days for some of my very favorite saints!

This is why I love October. The cool weather and fall leaves don’t hurt as well. The world turns orange, and Fr. Mosimann smiles. But I am really smiling celebrating my favorite saints!

Do you know when your favorite saints feast days are? And do you celebrate them? If not, you can celebrate with me. 😉 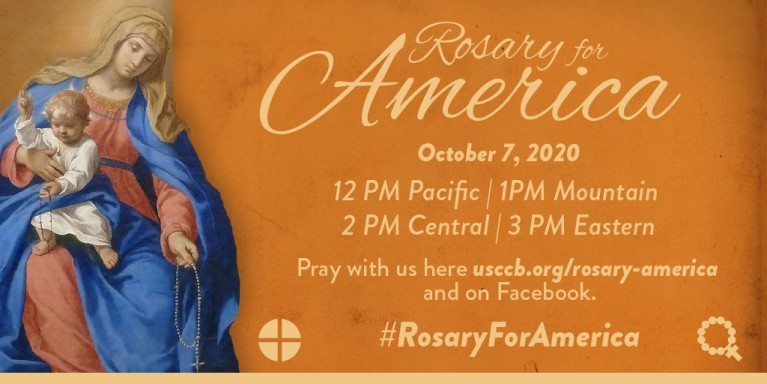 The rosary will premiere on Wednesday, October 7 at 3:00PM EST on our YouTube channel and Facebook page. We invite the faithful to join in this prayerful moment of unity for our country to seek healing and ask Our Lady, on her feast, to pray for us and help lead us to Jesus.

October. Respect Life Month. Rosary Month. Two great things that go together. Are you worried about our country, your family, world? I give you again these words of Blessed Bartolo Longo who had been greatly given over to a life of dissipation and idolatry, but realized that it was going nowhere and turned back to God. He wrote of this moment: “As I pondered over my condition, I experienced a deep sense of despair and almost committed suicide. Then I heard an echo in my ear of the voice of Friar Alberto repeating the words of the Blessed Virgin Mary: ‘If you seek salvation, promulgate the Rosary. This is Mary’s own promise.’ These words illumined my soul. I went on my knees.”

One such opportunity, next Saturday, October 10th Rosary Rally at noon in Loriella Park. See the notice on page 8 of this bulletin for full details. I encourage our entire parish to attend and support this most important event!

I know many folks that are praying a 54 Day Rosary Novena for our Nation. We need prayer now more than ever. The devil wants to tear apart our babies, families, neighborhoods, nation and world. This is what he does. Only Love and Mercy can combat his attacks; use the supernatural help at your disposal. Pray the Rosary.