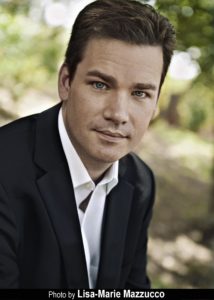 On Tuesday, May 15, 2018 at 7:30 p.m., Concerts at St. Mary will present organist Ken Cowan in a concert which will explore the many tonal resources of St. Mary’s 49-rank Robert William Wallace pipe organ.

Regarded as one of North America’s finest concert organists and praised for his dazzling artistry, impeccable technique, and imaginative programming by audiences and critics alike, Ken Cowan maintains a rigorous performing schedule that takes him to major concert venues in America, Canada, Europe and Asia.  Recent feature performances have included appearances at Verizon Hall in Philadelphia with the Philadelphia Orchestra, Maison Symphonique in Montreal, Walt Disney Concert Hall in Los Angeles as well as concerts in Germany and Korea.  In recent years, Mr. Cowan has been featured artist at conventions held by the American Guild of Organist, the Organ Historical Society and the Royal Canadian College of Organists.  Mr. Cowan has recorded numerous compact disc recordings which have earned critical acclaim for labels such as Pro Organo, JAV and Raven.  A native of Thorold, Ontario, Canada, Mr. Cowan holds degrees from the Yale Institute of Sacred Music where he studied with Thomas Murray and the Curtis Institute of Music studying with John Weaver.  In 2012, Mr. Cowan joined the keyboard faculty of the Shepherd School of Music at Rice University, Houston, Texas as Associate Professor and head of the organ department.  In addition, he is Organist and Artist-in-Residence at Palmer Episcopal Church in Houston.

The concert program which will be presented by Mr. Cowan will include performances of Mendelssohn’s Sonata in F Minor, Wagner’s Wotan’s Farewell and Magic Fire Music, Dupré’s Second Organ Symphony and Mephisto Waltz No. 1 by Franz Liszt.  Admission to the concert is free and a free-will offering will be taken to support future Concerts at St. Mary productions.  Following the concert there will be a reception in the church’s Parish Life Center where there will be an opportunity to meet Ken Cowan and share fellowship with others.