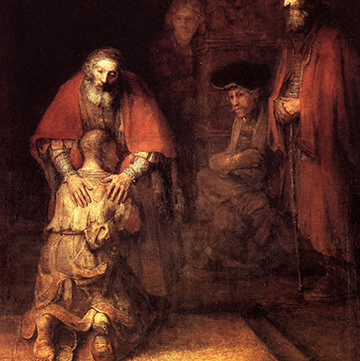 Sisters and brothers, after this weekend you will notice that all eyes, all minds, all hearts turn now to the solitary moment which defines us as brothers and sisters. We begin the final, proximate preparation for the re-present-ing of the battle waged for our souls, the moment that evil waged his most desperate war against Love, fighting for our redemption. It seems unlikely [to say the least] that we could possibly have been worth so great a price, to have been so beloved by God while so unworthy, while we were still sinners, that God would sacrifice his own Love to gain ours. Your love, and mine.

That Word of God has his most eloquent expression of Love in the silence on the Cross. Everything the Father has, he has given to me; everything I have received from my Father I have given to you…

In this Extraordinary Year of Mercy we listen to the Passion of the Lord according to Saint Luke. Though a small comfort, it is a comfort to listen that there were people around Jesus who were willing to show him mercy. It was Pilate’s intention to let Jesus go free, having found no fault in him, though he finally gave in to the demands of the threatening mob. Simon helps Jesus (willingly?) carry the Cross. The women of Jerusalem are lamenting over his suffering. In the Gospel of Luke Mary is not mentioned meeting Jesus along the way, especially odd since Mary has a prominent presence in the story of Luke. Maybe the story was so sad to Jesus’ followers that he is merciful in not relating it.

One of the two criminals crucified with Jesus, in the middle of dying, shows Jesus the mercy of acknowledging his innocence, which leads him to make an act of faith. In that last  moment of his life, Jesus extends to him the mercy of salvation.

In Jesus’ moment of dying, he offers a prayer to the Father on behalf of those for whom he is dying – us – that we be forgiven for our ignorant sinfulness. The last words of the Word reveal God’s Mercy, the reason for all of this: “Father, forgive them…” After all is finished, the centurion comes to faith, “This man was innocent beyond doubt,” and the virtuous and righteous man Joseph came to collect Jesus’ Body and honor it with a proper burial. We do what we can, in the face of such darkness.

But Luke includes another significant detail. There is something that happens in the midst of the darkness, the storm, the confusion of pain and death: the curtain in the temple is torn in two. When I was a kid I used to wonder why he bothered with this detail. We had curtains on all our windows at home. I’m not a fan of curtains, but I guess they do keep the  neighbors from looking into your house during the day.

It wasn’t until I was in seminary that I realized the impact of this event. You see, the Holy of Holies was the center of the temple, there were layers of security and checkpoints from the streets outside to various courtyards which restricted first the gentiles, then the women, then the lay men, then the people of privileged classes, finally the priests. The holiest place was the inner sanctum, the Holy of Holies where the ark had been kept. It was the place where God dwelled. Only the high priest (Caiaphas, that year) was allowed to enter one time, to take the blood of the sacrifices and sprinkle it on the sacred stones within, a ritual of purification by which the people believed they were forgiven their sins. The curtain was the final barrier: it was made of iron links. Its purpose was to keep us out.

At the moment of Jesus’ death, the curtain is torn top to bottom. It would have taken the same force needed to split the earth, to make the cracks that you can see today in the rock at the top of Golgotha inside the Church of the Holy Sepulchre in Jerusalem. The curtain is torn top to bottom: God’s Love is not conquered, but by his self-sacrifice he can open himself to all people, not a privileged few or those who even might deserve it on a rare day. It is ours. It is not separate, it is approachable. It is near. And we have life.